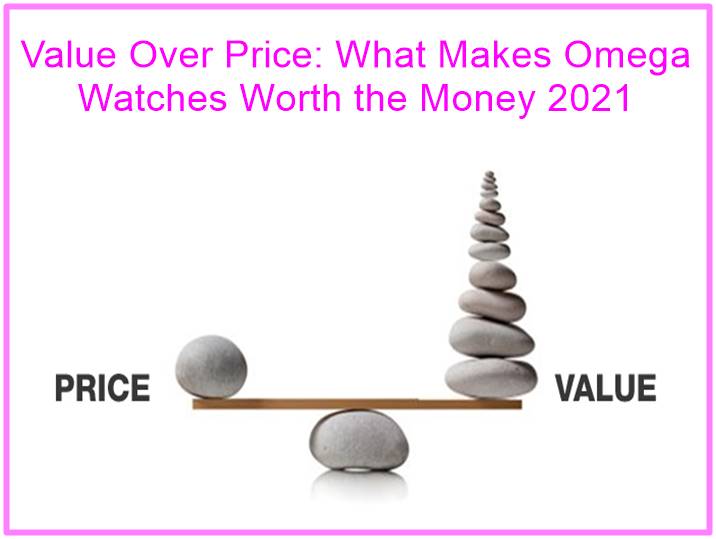 Anybody who knows their watches will know Omega. Founded in 1848 by Louis Brandt, the brand is rich in watchmaking history, having several accolades under its belt.

Just to name a few, Omega holds the title for being the first watch to land on the moon. It has been worn by notable figures and Hollywood celebrities alike such as the late John F. Kennedy, Prince William, and George Clooney. It’s also James Bond’s watch of choice, ever since 1995’s Goldeneye.

With that, it’s not surprising that an Omega watch price is at a premium. While it’s human nature to consider the price of your purchase, it’s just not the best case with the brand. The more you pay for an Omega watch, the more value you will get. In this guide, we are covering topics that justify the price of Omega watches and where better to start than with its history?

Omega: History & What Makes It Worth the Price

Omega has been around long enough to witness the evolution of luxury watches and has had a significant influence in making them what they are today.

Its first shop was started in a small Swiss village called La Chaux-de-Fonds, which Brandt later passed on to his two sons who continued the watchmaking business. In 1885, the company released their very first series-produced caliber, the Labrador, boasting many technological advances and excellent timing results.

Unbeknownst to Brandt’s sons, this watch movement would later provide the strong foundation for future innovations such as the 19-ligne Omega caliber that would later revolutionize watchmaking less than 10 years later.

Omega continued to make history through the 1900s, a period in which they earned several accolades, including becoming the official timekeeper of the Olympic Games starting in 1932 to this day. That same year, the brand also released the world’s first commercially available diving watch—the Seamaster.

Among other accolades under Omega’s belt include being the largest supplier of watches for the British armed forces, one of the first to create the Tourbillon wristwatch movements in the world, the official timepiece of NASA (1965), and the official watch of James Bond.

Fast forward to the present, Omega shows no signs of slowing down and continues to be one of the most desirable, timeless Swiss luxury watches to date. This is a trend that’s likely to continue for many years to come.

The Omega watch price ranges anywhere from $3,000 to $10,000 and more, and what makes them expensive lies even beyond their long history of success and reputation.

Because Omega watches are Swiss-made, they are almost automatically known for being high-quality and built to last. They are also endorsed by prominent celebrities and figures, and the resources they spent on marketing to build such a reputation make them worth the high price tag. Let’s dive a little further into that:

For more than 170 years, Omega has been to space many times. It’s also appeared in several James Bond films and in many Olympic games. All these continue to contribute to the brand’s reputation and global recognition.

Omega is a name that’s almost synonymous with craftsmanship and quality. The brand takes pride in producing precise and exquisite pieces, and not one watch lacks in terms of design and engineering. These are also the few reasons why Omega watches retain, if not increase in value, after the sale.

Swiss-made watches are highly coveted by the majority of watch enthusiasts and being a Swiss luxury brand enables Omega to command a premium price tag for their watches. But, what makes a watch Swiss-made, anyway? A watch movement is considered Swiss if it’s been assembled and inspected in Switzerland. At least 60% of its manufacturing costs should also be generated in the country.

Omega produces about 800,000 watches every year and their low production volume automatically drives a higher price tag for each piece. This is particularly true for limited edition models where they spend a lot of money to create.

Many Omega watches can prove to be a great investment. Just take a look at some vintage Speedmasters, which have doubled in value, if not more, in the last several years. They hold their value well and the most desirable models will increase over time.

Which Omega Watches Should You Buy?

The perceived value of a watch depends on the person wearing or admiring it. The same holds true about many other things, particularly non-essential items like designer clothes, gadgets, and luxury cars. But, if you’re convinced that an Omega watch is worth its price, below are some recommendations for a first-time Omega buyer like you.

The Omega Seamaster 300m has been a sought-after diver watch and weighs up closely to the standard of all dive watches, the Rolex Submariner. It has everything you would want in a dive watch—mirror-polished ceramic, large luminous hands, and the Master Chronometer Omega Caliber 8800, all of which makes the model a super legible tool that looks elegant on the wrist. Check out some of the favorite models from the line:

The manual winding Moonwatch is the longest-produced Omega timepiece and is best known for being worn by Buzz Aldrin when he stepped onto the moon in 1969. Early this year, the iconic line received a long-overdue update, which included the use of the new Master Chronometer caliber 3861. Here are some Speedmaster Moonwatch pieces to check out:

The words affordable and expensive are relative. But, we can all agree that anything that costs thousands of dollars is expensive—and Omega watches are one of them. While it’s the case, their prices are justified by the value they can offer in terms of style, quality, and longevity.

So, to answer the question, are they worth the price? Yes and hopefully this article has answered your question satisfactorily.